“British Army-Malayan Soldiers” (BA-MS) is the term preferred by men from Malaysia who served as what the British called “Locally Enlisted Personnel”.

This group of loyal men have fallen out of sight since the British left Malaysia in the early 70’s, but their memories are as vivid to them today as ours are to us. They remember their service with honour and many would like to be remembered by the British Government.

Those who were still serving in 1971 were made redundant. Most do not receive a pension or any form of assistance or support of the kind available to other British veterans.

British-Army-Malayan Soldiers served in the British forces on the same terms as us and are also entitled to the PJM. However, because they served under Queen’s Regs, they must apply for their medal via the MoD - and so they fall under the same restrictions as British citizens.

Despite their loyal service BA-MS do not have the Queen’s permission to wear their Pingat Jasa Malaysia. They now seek that permission and so are supporters of the Fight4thePJM.

Here is one story - It is Nagei’s Story

The story has unravelled as a result of an exchange of letters between Nagei and Barry during this fight for the right to wear the PJM - an issue that is of the utmost importance and significance for these loyal men.

I asked Nagei for details of his service. This was his reply:

Service: 30 March 1965 to 13 April 1971. (Declared redundant by the withdrawal of the British Forces from Malaysia) 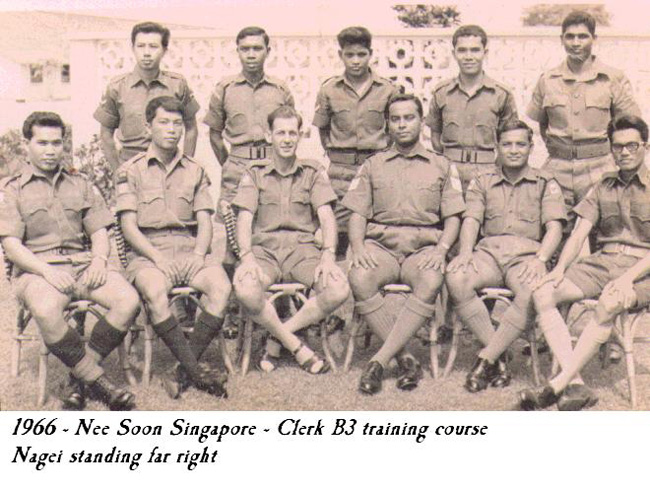 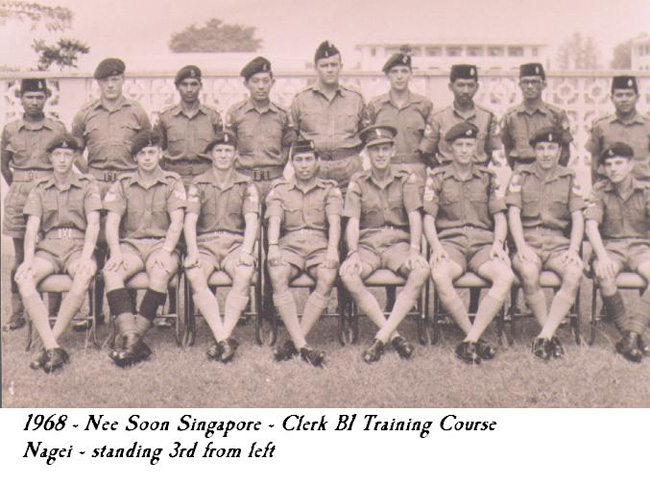 Married to Gerty Fernandez at Malacca Registry Office in December 1968.

Daughter, Barbara was born in November 1970 in Malacca.

Son, Gary was born in Malacca after my army service in June 1973.

In answer to general enquiries about the support BA-MS men receive, Nagei said:

The Kementerian Pertahanan Malaysia -Mindef (Malaysian Ministry of Defence) in recognition of our exemplary military service in the British Army ¨Far East Land Forces (FARELF) Malaysia & Singapore, has been very caring towards our welfare.

The Mindef through its Jabatan Hal Ehwal Veteran (JHEV) (Veterans Affairs Dept) has been providing us with free medical attention at the government clinic/ hospitals/health centre and financial assistance to the needy.

At the same time we appreciate the Malaysian Governments inability to change certain British Army policies that govern our rules on our pensions and privileges.

Never the less, JHEV Mindef has not forgotten us and we are indeed grateful to them and our Government of Malaysia.

We are also very grateful to our DYMM SPYDPT Agong for His Majesty’s concern about the welfare of all the ex servicemen in Malaysia.

With due respect to all concerned, the MOD UK should treat us as equals with our UK colleagues as we at the Far East Land Forces were: -

(Nagei is a member of the Royal Army Medical Corps Association and the National Malaya Borneo Veterans Association - UK. He is entitled to the PJM and has applied for his medal.) 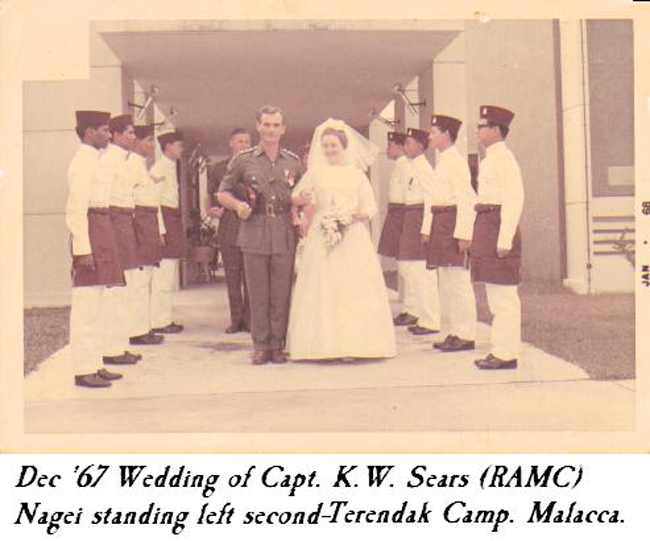 Support from the British Government

In relation to support from the British, Nagei said:

The British Government - our former employer - has left us in oblivion.

Regarding the following comments, Nagei said “These are my personal views and opinions and I do not represent any groups/individuals/organizations/associations or the ex British Army Malayan Soldiers. The words ‘we’ and ‘us’ refer to the ex BA-MS in general.”

We are the ex British Army- Malayan Soldiers - Locally Enlisted Personnel in Malaya and Singapore. Our first basic recruit training centre was located at Port Dickson Camp in Malaya and after 1957 it moved to the Nee Soon Garrison in Singapore.

In 1972 the British Army -Far East Land Forces (FARELF) Command withdrew its Forces from Malaysia and Singapore. We, the serving soldiers at that time, were declared redundant. Since then, we have felt abandoned by the most professional army in the world and we are all now 60 -80 years old civilians living with our extended families.

* Most of us do not receive monthly pension but those with pension get very little. For instance, the monthly pension for the rank of WO 11 in Ringgit Malaysia (RM) is British Army-Malayan Soldiers - RM450.00 vs Malaysian Armed Force - RM800.00.

I think our retirement pension should be reviewed accordingly.

We would like to appeal to MOD UK for monthly pensions for those who did not complete the 21 years of service, especially for all the soldiers who were declared redundant by the withdrawal of British Forces from Malaysia in1971. It would also be very helpful for those of us without any army or civilian pension.

* The ex Angkatan Tentera Malaysia (ATM) (Malaysian Armed Forces) and we are members of Persatuan Bekas Tentera Malaysia (PBTM) - Ex Services of Malaysia. A Life Member pays a one-off payment of RM50.00 for membership. The PBTM an NGO body, dealt with all welfare matters until 2002 when its duties were taken over by Mindef’s Jabatan Hal Ehwal Veteran JHEV (Veterans Affairs Department). The PBTM, now with its responsibilities scaled down, deals with its own association matters only.

* The Malaysian ‘NAAFI’ is called the PERNAMA and it sells Duty free beer to the Non-Muslim soldiers & ex servicemen of ATM only. This privilege is not extended to us. Our non-Muslim BA-MS are not entitled or eligible to apply to buy Duty-free beer at the PERNAMA. My own applications for the beer card in 2002 and 2004 were turned down because I did not have a Buku Merah (Red Book) ATM, the Malaysian Armed Forces Discharge Book. Therefore, our British Army Discharge Certificate FARELF Form 238 is not recognized because we were not represented at the signing of business agreements between the PERNAMA and the Malaysian Armed Forces.

* We are fortunate to have JHEV but as former British soldiers we are without:

Any extra help and financial assistance from the above would be of great help to us.

* An Association for ex British Army-Malayan Soldiers LEP - is a good idea but most of us are very old with our daily activities restricted.

* The annual Veterans Day/Poppy Day/Remembrance Day (for our fallen brothers) is known as Hari Pahlawan (Warriors Day). The Agung and the British High Commissioner to Malaysia are present at the ceremony held in Kuala Lumpur, organized by the Federal Government. The state level Warriors Day celebration, which is jointly organized by PBTM & JHEV, is held on the 31 st of July. There are no representatives from UK (British High Commission or MOD) representing the British Straits Settlement of Penang and the British Straits Settlement of Malacca at the ceremony in Pulau Pinang and Melaka. Many Veterans from Britain/Australia/ New Zealand on private visits attend the ceremony at graves of the unknown/fallen heroes resting in military and war graves in Malaysia, but they (are unaware) do not attend the state level celebrations organized by PBTM/JHEV. The ex BA-MS would very happy standing together with our UK representatives & colleagues as one squad (once again), at the ceremony.

* Reunions - there hasn’t been any attempt by anyone, all these years, to reunite us with our former colleagues from the British Army.

A ll the ex British Army-Malayan Soldiers LEP would have faded away by year 2030.

Here is a message from Nagei received after he read this page:

I hope my story on the PJM Forum does not offend anybody.

I would like to apologise to all the British & Malaysian readers if I have unknowingly used any any strong words or inaccurate information.

I hope this my message can be added on in the story.

[Ed: Dear Nagei, what you have sent to us on this page is not only honourable, it is also very poignant.]

Nagei has sent me details of two British Army-Malayan Soldiers who had a long and distinguised service with the British Army.

These two men are also eligible for the PJM and we are all fighting for their right to wear it with the Queen's approval.

As far as the PJM is concerned, Nagei said:

It would be indeed a great pride and honour for the British Army-Malayan Soldiers to be awarded with a Medal of Honour by our King, The DYM Agung.

A Happy and Proud Ending to this BA-MS Story

"It would be indeed a great pride and honour for the British Army-Malayan Soldiers to be awarded with a Medal of Honour by our King, The DYM Agung."

And, finally, Nagei has at last received his just reward. In Kuala Lumpur, on the 50th Anniversary of Merdeka, Nagei was presented with his Pingat Jasa Malaysia by Malaysia's Deputy Prime Minister: 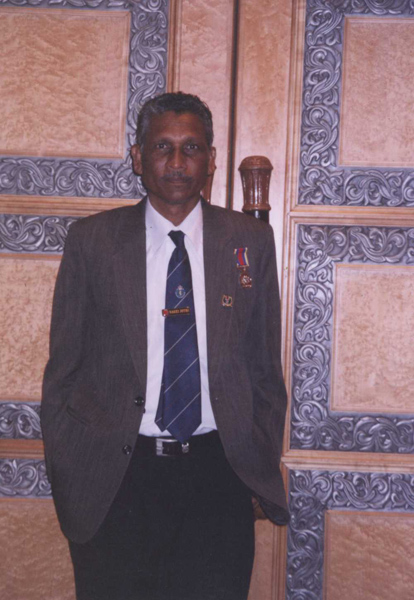 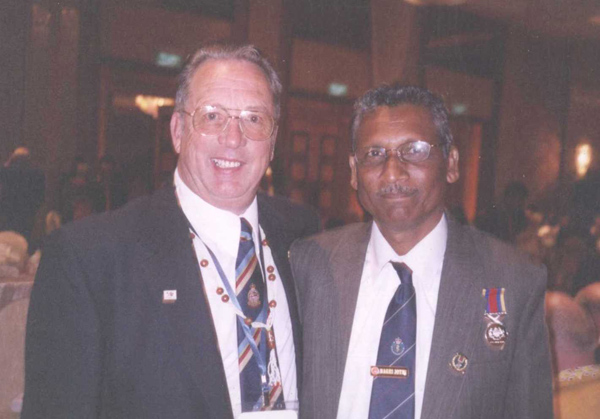 Paul Alders, a leader of Fight4thePJM who fought to enable veterans like Nagei Jothi to be able to receive his PJM.
Nagei is also wearing his Fight4thePJM Lapel Pin. 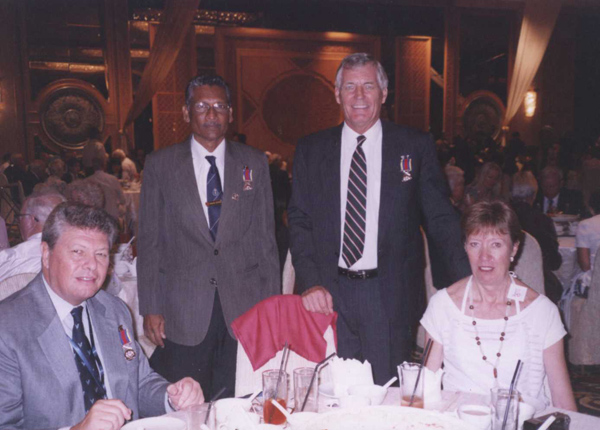 Nagei Jothi with friends - Douglas Fox is on seated on left 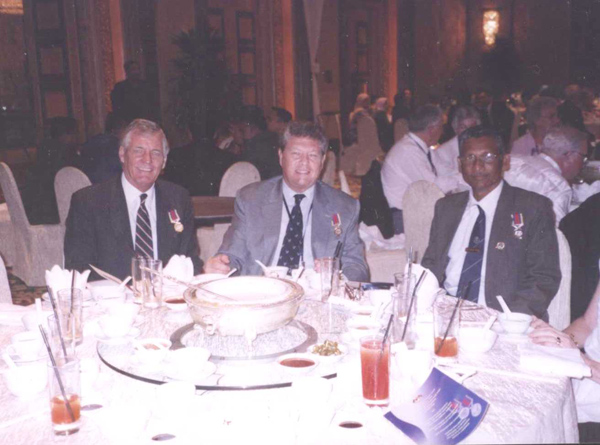 An event that Nagei nor any of his Malaya-Borneo friends will ever forget.

And to think that a few British civil servants did all they could to deny these men this honour.

Comment=For God's sake give those soldiers what they have earned. Let's acknowledge their help and for once stop all this pussy footing around.

Comment=I was then SSgt English, seated third from the left in the picture dated 1968 Nee Soon, when I instructed the B1 Upgrading Course. It was a privilege to serve with the Malay soldiers and I fully support any action they may take to improve their lot.