Operations at Sea - Page I

The Navy (Australian, New Zealand and British) played a key role in the Far East and we'd like to show more images and publish more stories on this page that we have dedicated to them. Here is page 1 of our memories.

HMS Lincoln - a ship that served in the seas around Malaya, Singapore, Brunei and Borneo in the period 1962-1963. 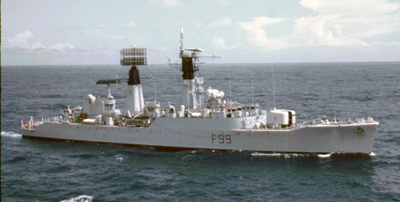 Terry Revell has informed us of the very sad news that Pete Swann, who sent us the images of his days on HMS Ickford (see below), died in June - from cancer. Pete leaves a widow and two sons and Terry, who served with Pete in the Far East, Middle East and Europe, is now in touch with the family. We hope to hear more soon.

I contacted another of Pete's old shipmates, Dick Wyatt (who has previously been in touch with our web site), and told him the news. He wrote back saying:

"That's terrible news. I served with Pete for a couple of years and he was a good mate and a great 'Run Ashore'. I don't have an email or an address to send his family my condolences [We have asked Terry to pass on Dick's condolences to Mrs Swann and her family]. I have some other photo's of him on the Ickford if anyone would like copies."

Dick then sent this photograph of himself and Pete Swann: 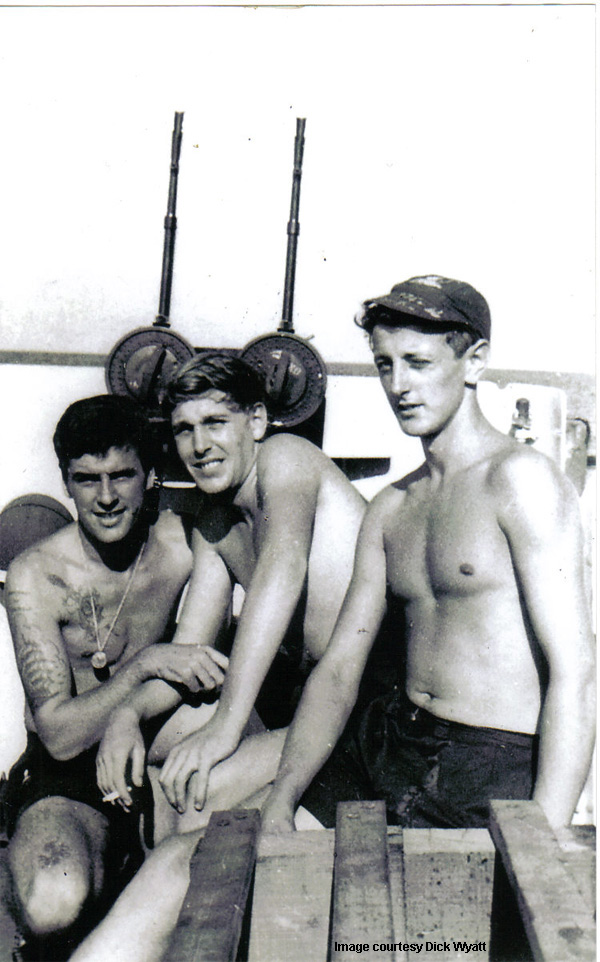 Dick is going to send us some more photographs and we'll post them here. Meanwhile, here is Pete's story - just as he sent it to us.

Pete has kindly sent us three images from his PJM days in Malaya-Borneo. These are wonderful, evocative, 'shots' of the critical Operations at Sea ... (Ed: I'm ex-Army ... these images are a timely reminder that it didn't all happen on land!) 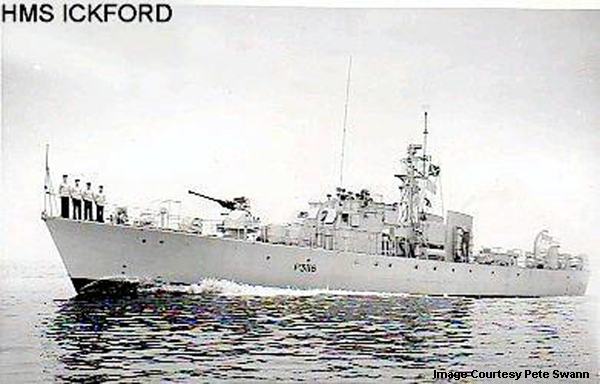 "HMS Ickford before going out to the Far East. She came out of mothballs in '64 and was transported as Deck Cargo on the RFA's." 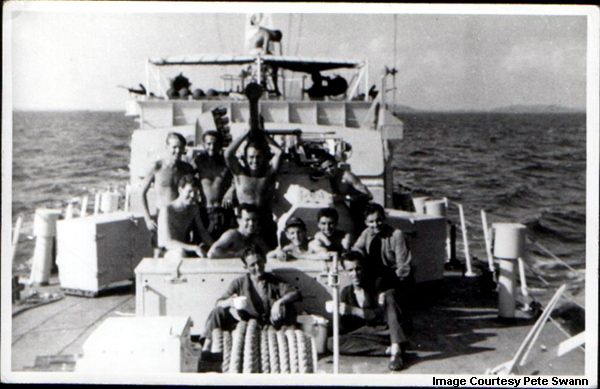 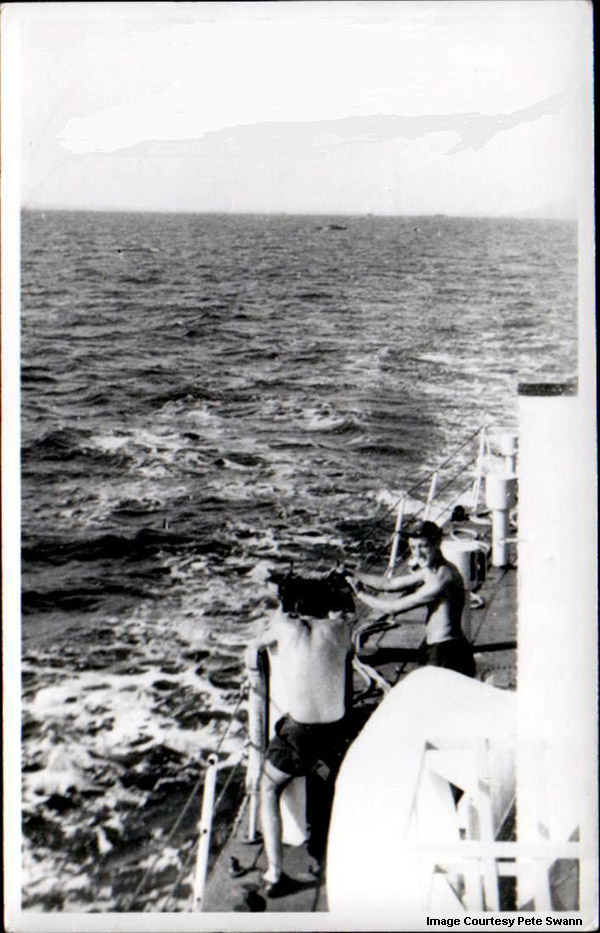 Dick (who Pete Swann names in the above photograph) has sent us some more images of his time in the Far East, of the crew of HMS Lincoln and Ickford .... and of Pete Swann. He wrote:

"We commissioned the Ickford in Singapore Dockyard. She arrived in Cocoon on the deck of a tanker. All her equipment was in a container. The weapons we scrounged from the Armaments depot where most of them had been since the war! We had very little time to stick it all together and make it go! Lt."Spike" Milligan (The squadron gunnery officer) took us to sea, taught us how to shoot the various weapons and then we were let loose on the unsuspecting Indonesians. Great times, hard work - but good shipmates and for once I think we made a difference." 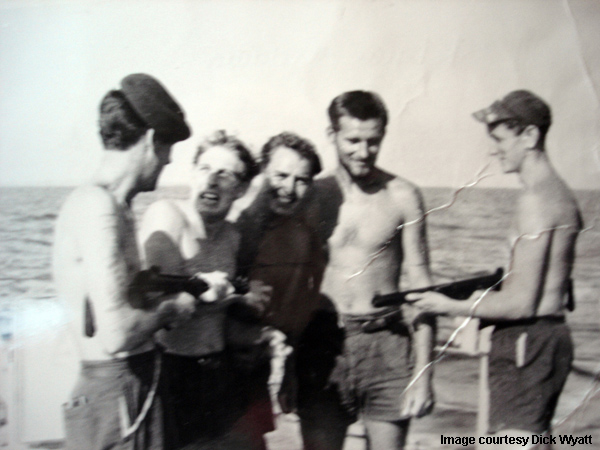 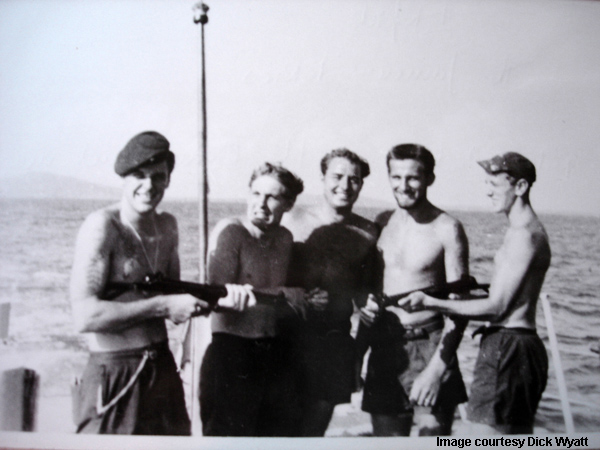 "Pete and co. messing about with Sterling SMGs (not loaded!)"
[Pete Swann is on the left, Dick is on the right] 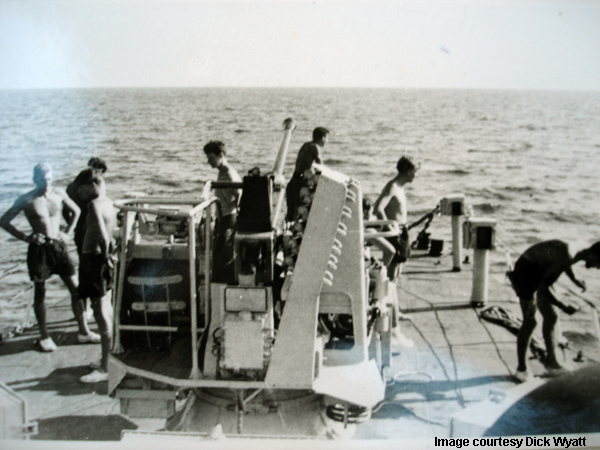 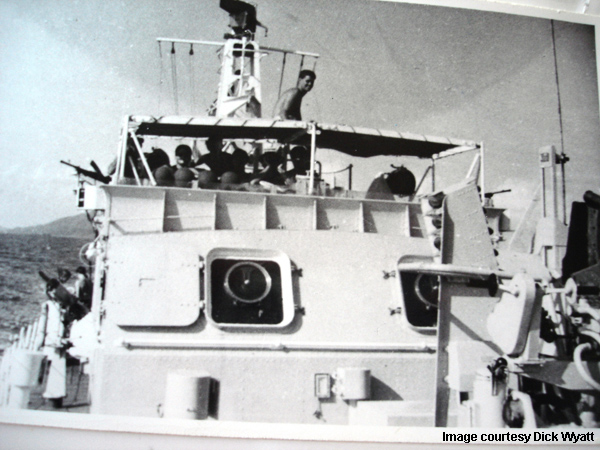 "The Skipper on the uper bridge of HMS Ickford" 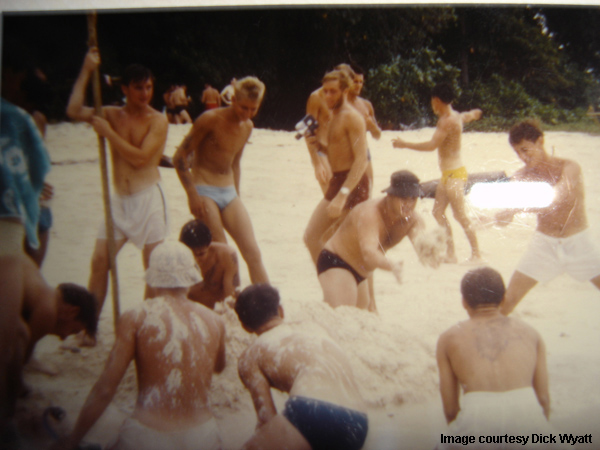 We have now heard from another ex-RN who served on HMS Ickford in 1965/66. Richard Lucey has sent us some photographs saying:

"I am delighted that it is of interest and am happy for any of my photos to be published on the web.

Also, as I served on HMS Ickford 1965/66, I have other information and photos which I will forward in due course if of interest. "

Like us, we are sure you cannot wait to see the other images when they arrive! Here are the first six, though, with Richard's captions. 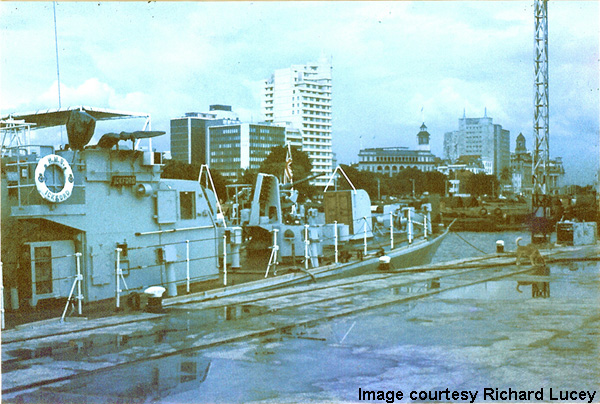 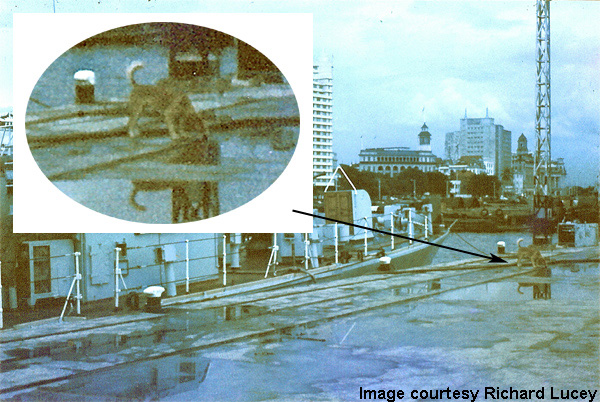 One thing I did notice from the previous photo was "Buster Brown", the ship's dog - in the middle on the right of the first photo. Never noticed that before. Buster was well known thoughout the Far East fleet, and was originally from Malta. 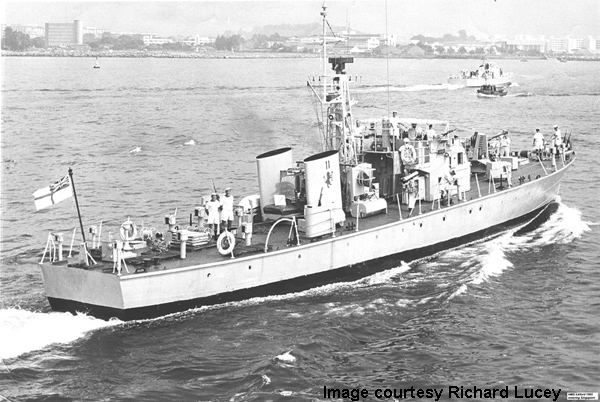 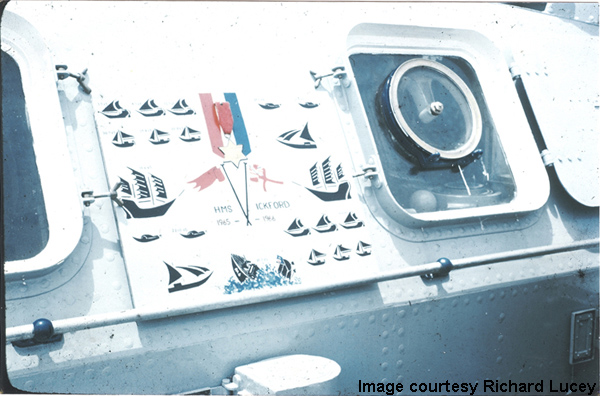 Trophy board displayed in habour 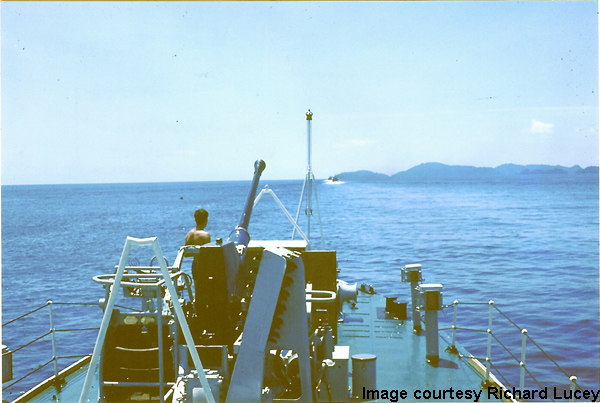 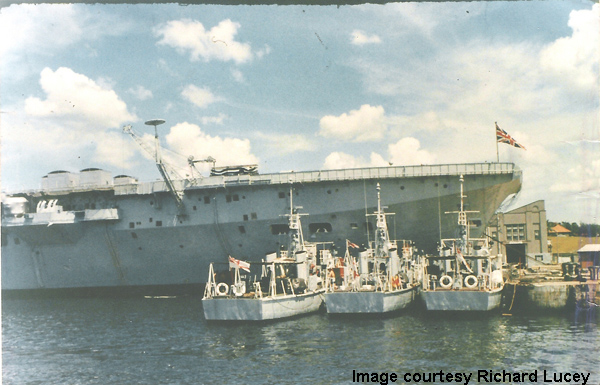 Three of the "Fred boats" alongside. HMS Albion in background. Ickford is in the middle with two others Camberford,Tilford or Greatford. 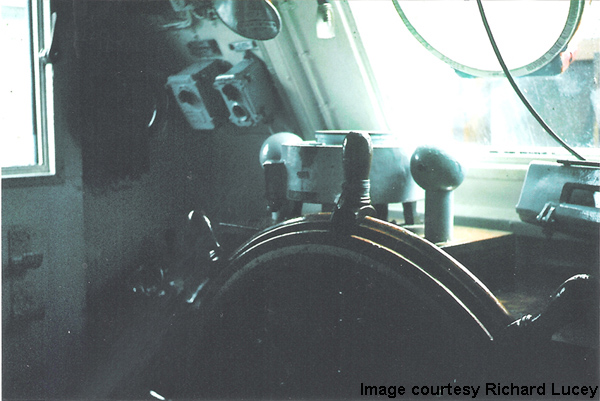 Wonderful piccies - we look forward to seeing more when Richard (or any other volunteers - hint!) have time to scan and send them in.

Comment =Guys, even as a Kiwi, I served first on HMS Ickford and then HMNZS Santon...

Go for it with all you have. You deserve the honour. If your country can't bring itself to recognise you....then rest assured, we do from down under...

Receiving the GSM Borneo, we should have the same rights to wear the Pingat Jasa Malaysia medal as can our Commonwealth friends.

Comment =I left UK in September 1964 for the Far East on HMS Zest a Z Class Destroyer converted to a Type 15 Frigate with Cdr John Fiddian-Green RN in Command. We spent the next 14 months operating out of Singapore on patrol in the Malacca Straits weeks in and weeks out and for a change of scenery patrolling the waters of North Borneo around the Island of Sebatik and supporting our gun boats going up river from Tawau.

Delighted to learn that my small contribution has been honoured by the King and Government of Malaysia which I shall wear with great honour alongside the GSM Malaysia and Borneo Clasps.

No doubt the HD Committee concerned will Court Martial me!

This next message was received some time ago. Unhappily, I have to report that Pete died in June this year (2009). Yet another ex-serviceman from Malaya-Borneo dies knowing that civil servants wanted to prevent him wearing the medal he had earned and that they had knowingly prevented The Queen from giving him Her permission to do so - just as She had the rest of the Commonwealth!

Comment =I served on HMS Ickford and saw the dirtier side of the confrontation in 1964, both in the Singapore Straits and Borneo. Please let those who gave life and limb wear their medal with pride. We had the task of bringing the above mentioned vets home to safety. A job that was not pleasant.

Comment =I served with Pete Swann on HMS Lincoln And HMS Ickford on both Borneo patrols and in the Malacca Straits.
If you watch the Remembrance day Ceremony at the Cenotaph, try counting the Medal ribbons on the chests of our illustrious members of Parliament. I think you'll find nearly one!! Perhaps this explains the shoddy treatment our current and ex-servicemen receive at their grubby little hands.

Comment =The photo of HMS Lincoln brought back memories of my service on board during 1965 as a Midshipman under Cdr Stigant. Borneo, Malacca Straits, Singapore Roads on OP duties and some good R&R in Hong Kong and Bangkok - plus a joint exercise off the Philipines with the USN

Two weeks ashore with a Royal Artillery detachment of the Royal Marines at Tawau was also exhiliarating!

John has written again about HMS LIncoln and HMS Ickford, providing a fascinating link between the two ships:

"I have an entry for April 1965 when the Captain (of HMS Lincoln) announced to the crew that Ickford was coming out of reserve and volunteers were needed from Lincoln to man her (HMS Ickford) for patrols in the Singapore Straits. The CO was not appointed yet ( I presume this was later to be Lt. Essenhigh) but the First Lieutenant, a Sub Lt Derek Kerridge, and 15 other ranks from Lincoln were appointed to take her to sea. She was nicknamed Lincoln's baby."

[Which, as John pointed out, raises a question as to HMS Ickford's pre-1965 service. Does Pete, Richard or anyone else have any more info about service in 1964? Thanks, Ed]

Comment = I'm ex RN, served in the Indonesian Confrontation on two minesweepers covering Borneo, Brunei, Sarawak etc between 1964 and 66 and and was regularly in trouble ... HMS Thankerton and Hubberston and a few months on the olde mull of Kintyre.

GOBSMACKED after seeing the 'ickle ickford after so many years. Eli used to be on the olde Thankerton. He was the only one who could point the Oerlikon (20mm twin) anywhere near where it should be pointing.

I painted the 'glory' board when PB6 was sunk (nice artwork eh?), teach you to go round big rocks too quickly - and watched the medal being made and was at the grand presentation.

Blimey, takes me back a bit. Totally taken aback . if anyone from those barefoot days remembers Bill Vernon, the REM on the olde Thankerton and Hubberston, it would be grand to hear from them. Cheers.

Comment = Your photos have brought back a lot of memories. I was serving in the Royal Malaysian Navy aboard KD TANJONG MERANG and used to alongside at Teluk Ayer Basin for stand off. Used to see quite a number of CMS and the ICKFORD Class standing off in the day and slipping off in the afternoon for respective patrol areas around Singapore.

I know how you all suffer especially those serving on patrol craft like ours and I sincerely think you deserve to wear the medal.