The Malay Police accounted for more of the enemy, Communist Terrorists and Insurgents, than any other force. They also suffered proportionately higher casualties. Those of us who were involved in patrols in the jungle know the fear and tension that such potential close proximity to the enemy could create. Such a regime was an everyday reality for the police. We have started this section in our salute to them.

Roy Follows, who was a Malay Police officer, has kindly sent in some images to start the ball rolling. His message with the photographs was:

"I have a number of photographs, some taken while on operations , others of Fort Brooke, and even a few of CTs, plus some of my original operational maps. Those who were engaged on ops may find them interesting as the areas shown on some had not been fully explored or charted, with part of the map featureless, without contours lines, yet it was of a mountainous region where some of them soared to a height of well over 4,000 ft aslo. To kick off, here's a couple taken of cts by cts. Roy"

We hope to be able to publish more images here in the near future. 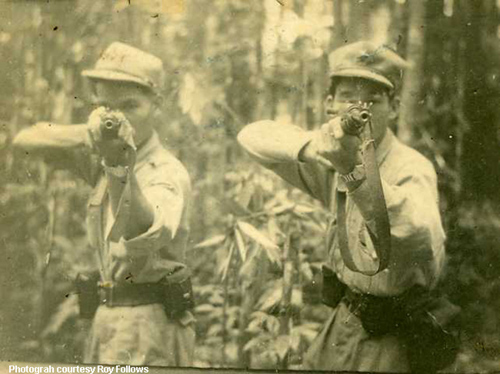 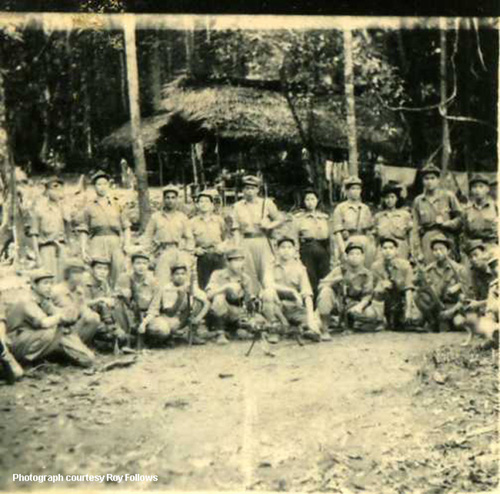 The above two photographs were taken by Communist Terrorists (CTs) by CTs. Note the Chinese made weapons. The Emergency was not a sideshow. It was a war and would have been referred to as such if the word had not potentially and negatively affected insurance claims primarily made against the London market!

The war was backed by both Russia and China (representatives of both regimes were at meetings with Chin Peng just before he organised the first murders of innocent civilians).

Roy has sent us these two images of two Communist Terrorists - a bugler and a photograph of Fun Ming. 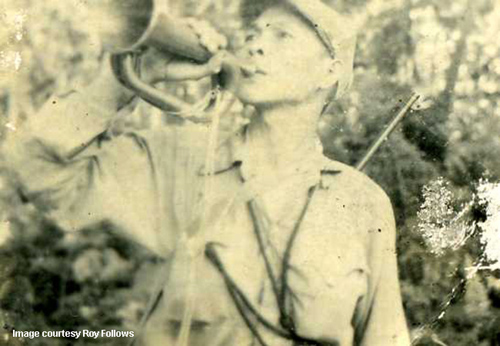 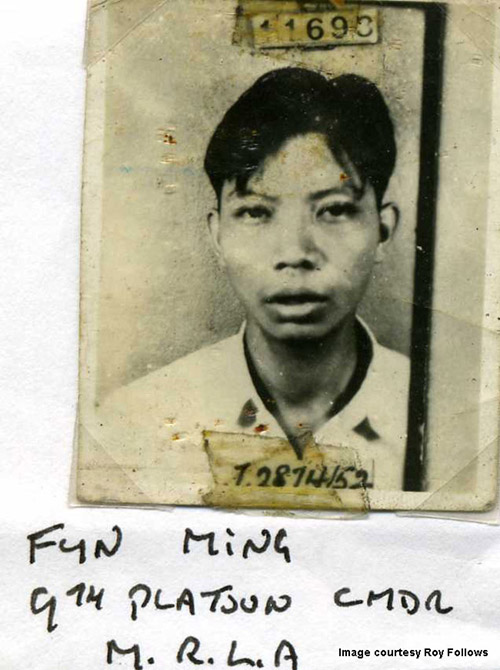 " The notorious 9th operated in the Kota Tinggi , Mersing ,and south eastern Johore area down to Pengerrang, a coastal village across the Straits from Changi. Thanks to a clandestine operation that I and the Pltn carried out for the 'Dirty Tricks' department, the 9th received the retribution they so rightly deserved - those 9th platoon members who survived the ' DTs' fiendish device, all surrendered. As for Fun Ming the Political Commissar, through a master stroke of subterfuge which is far too complicated for me to explain here, the Police Special Branch arranged for his execution. He was put to death for being a 'traitor' to the CTs (which he wasn't) by his comrade and dedicated Communist Hor Lung , the leader of the Johore Politburo."

His covering message for these four images reads "Please find enclosed more pics (4). How did I come by these photographs of CTs? It was after attacking a CT camp (I hate to admit it, but the few that were in it, all escaped ) that I came across a CT's rucksack which, amongst other things, contained documents and many pictures, a number of them which instead of being passed on to Police Special Branch somehow ended up in my rucksack!"

However you 'liberated' them, Roy, we are grateful to you for sending them to us. 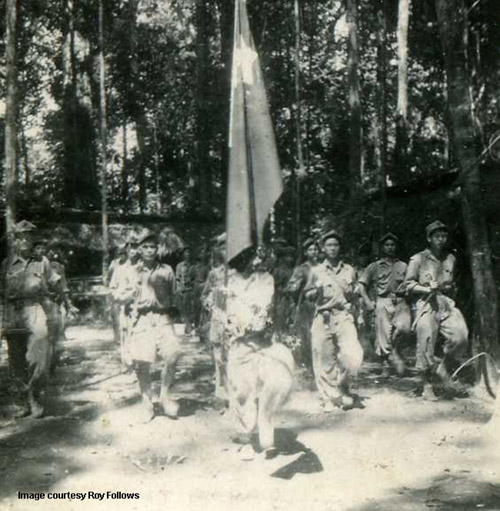 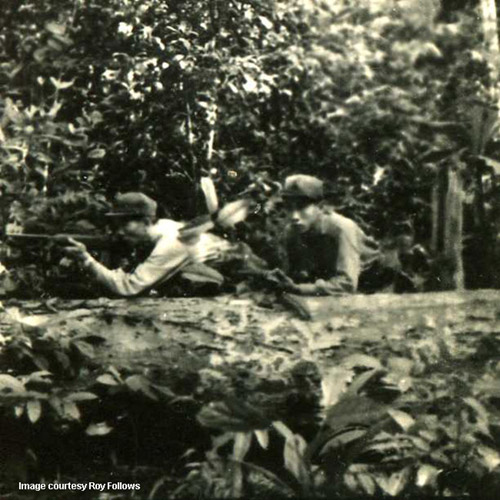 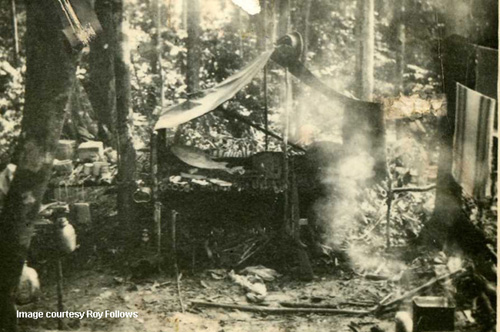 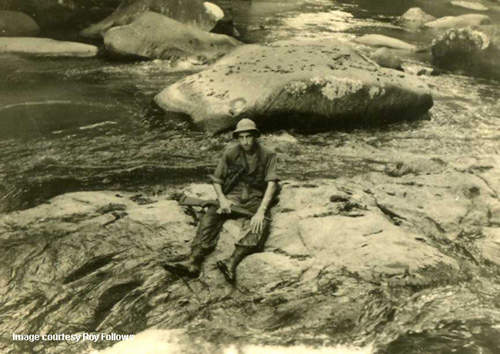 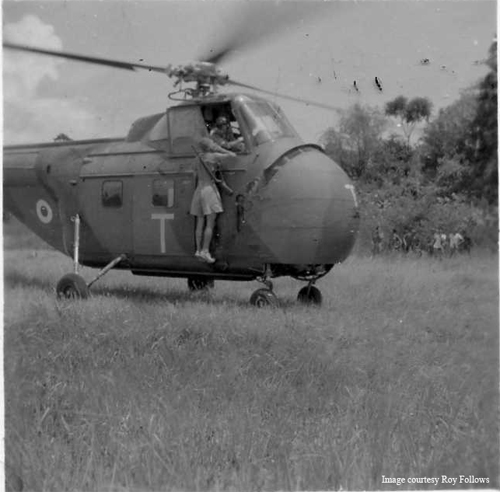 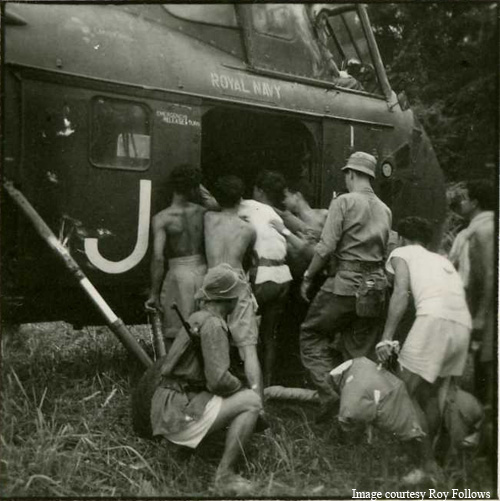 Operations Johore. Man with fractured leg, along with AD parachutes, being airlifted out.

A Roll of Honour

Roy has sent this image of just one Roll of Honour - that of Malay Police Lieutenants and Sergeants. As mentioned elsewhere, the Malaya Police accounted for more of the enemy than any other force - and took proportionately higher casualties. 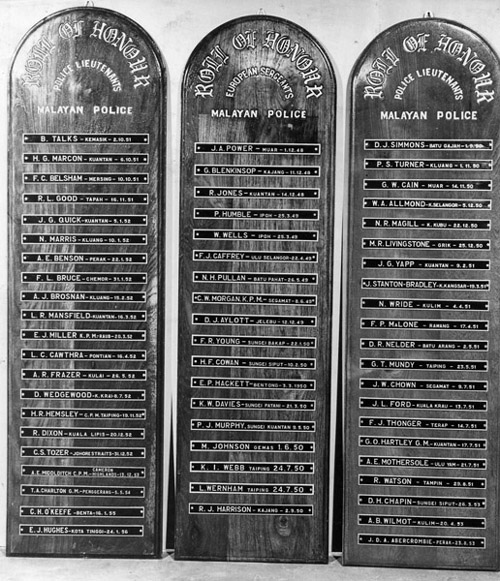 "We Shall Remember Them"

When sending these next images, Roy said "Not counting all those at Fort Brooke, but during my time on operations, I must have taken something in the region of well over fifty air supply drops. Of which, thanks to the RAF and the army despatchers, only a few ever missed the target. Having said that, I think we must have been the only platoon on record, to watch in disbelief our supplies miss the DZ, to splash into the China sea."

Ed: I know we have a number of RASC Air Despatchers looking into this web site - methinks these images will bring back many memories. 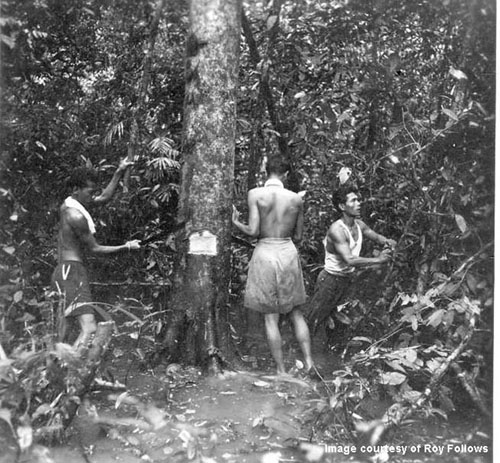 The Platoon hacking out a Dropping Zone in the jungle 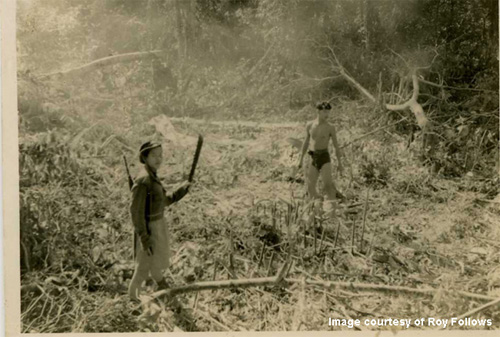 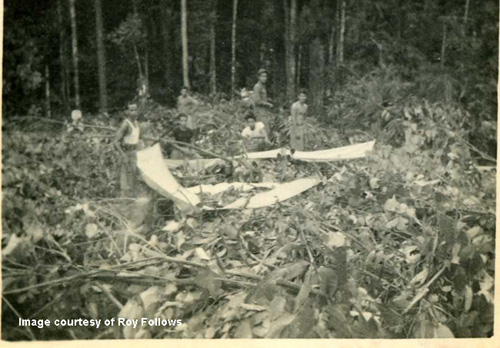 Laying out the recognition panels (Foxtrot) 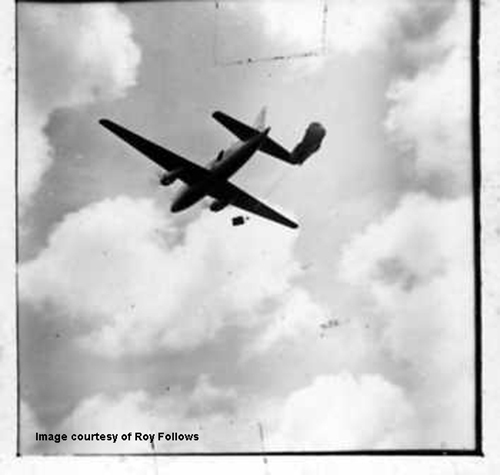 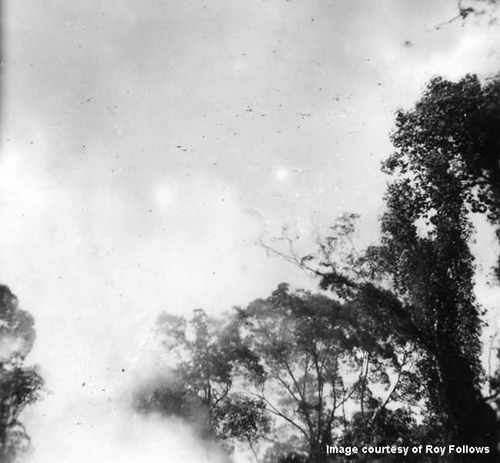 Smoke ignited to help the pilot locate us 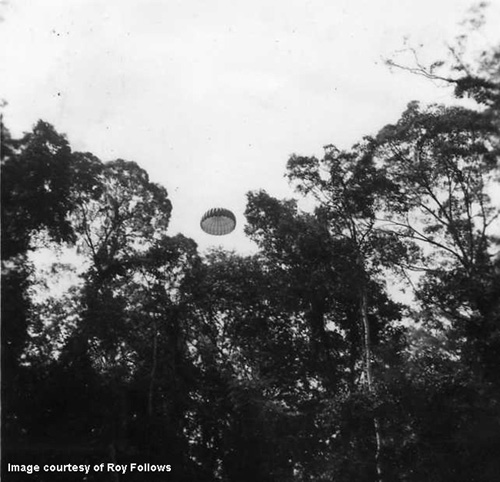 Parachutes descending. On seeing where the supplies were about to land, Roy says the comments were "Oh golly! Bother! They've missed the DZ." (Ed: Err ... don't think so, Roy! I can lip read and even my 'Malay' tells me those were not the words used!) 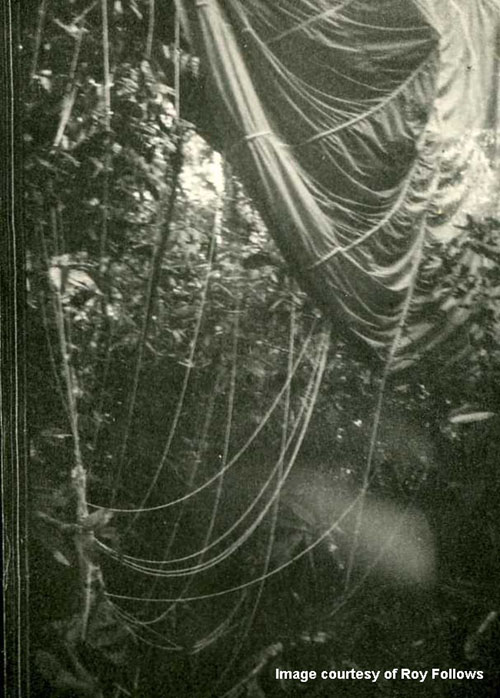 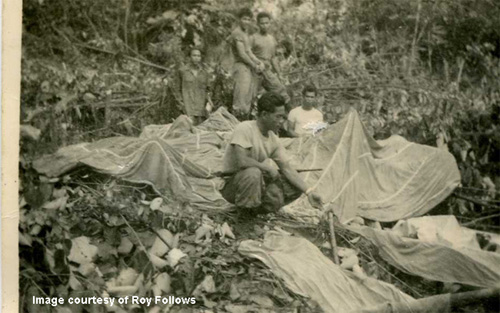 Drying out the parachutes before repacking into their canvas containers

If you want to know more, read Roy Follow's book "The Jungle Beat - Fighting Terrorists in Malaya". Better still, take part in one of our Competitions and win a signed copy!

Another evocative book that we think will bring back many memories is "The War of the Running Dogs" by Noel Barber.

Message=Many thanks to Roy Follows for allowing us the chance to see these photos. I look forward to viewing the others when they are posted.

As for books covering the Police angle of the 'Emergency', here are two more titles: "Spearhead in Malaya" & "The Camp Across the River", both written by J W G Moran and covering his time during 1950/51 with a Police jungle squad based at Sungai Lembu, near Bukit Mertajam, PW.

Both are long out of print but some copies are still advertised now and again on the internet. That's where I got mine.

[Ed: Laurie, Roy has kindly sent us more evocative images and these have been published on this page.]

Message=Royal Malaysian Police had played a significant role during the first emergency and the second emergency. Their contribution should be studied and recorded and publicised so that the younger generation of the public and members of the police force should are aware of the roles played by the Malaysian Police. Many police officers and men had died in upholding law and order in the country during emergency. I am planning to do PhD on the roles of Malaysian Police during the emergency to honor the RMP in the war against communist insurgency in Malaya and Malaysia. I hope to receive the support of the RMP.I hope the PhD would later be a reference material to the younger Malaysian eyeing to serve the Royal Malaysian Police. A great Force not to be found anywhere else around the world.

[If you can help in Mior Roslan's research, please send your contact email address to me at barry@fight4thepjm.org. Thanks.)